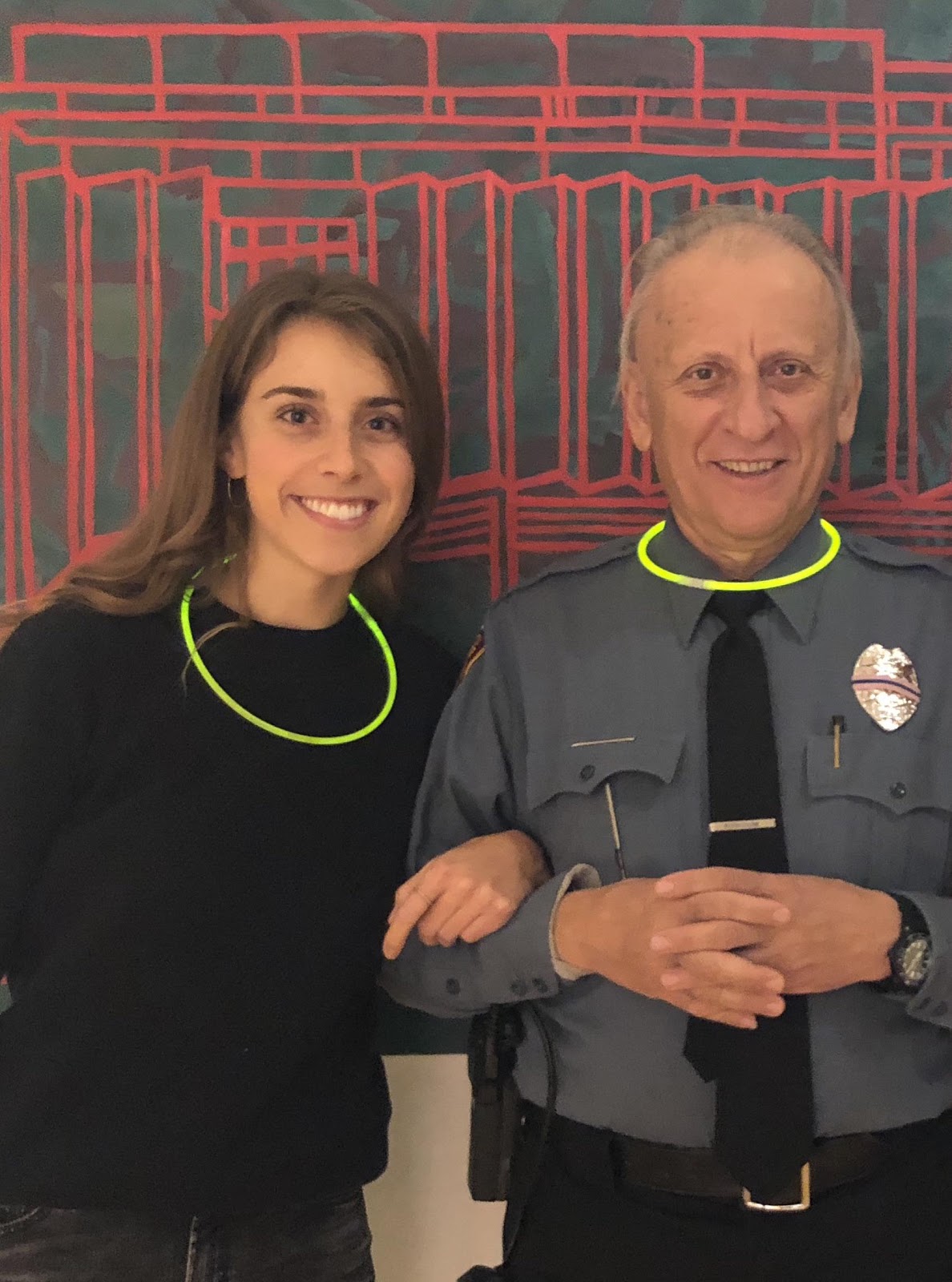 “A Greek Security Guard and Friend of Honor”

Most museum security guards are there to yell at you, but not this one. This one is there to be your new best friend.

Entering the glass-enclosed museum feels like walking into a zen Japanese garden. The tranquility is almost jarring. Before you have a chance to be drawn into a meditative state, you are greeted with an unanticipated, bellowing “Hellllooooo!” from above. It’s Peter, standing at the second-floor balcony like a Greek god.

It bears asking how a man who once spent his days delivering pastries and cigarettes under the Mediterranean sun ended up in the polar climate of the American Northeast, making his rounds meandering through galleries of exhibited works of art. Peter hails from a small village in the eastern part of Greece called Geraki. If you don’t know where it is, he will show you on a map. If you wonder what it looks like, he will show you with a picture. He emphasizes the G with every essence of his Greekness. Ggggeraki. His family had farms. And olive trees. And no electricity. Living a life frozen in the medieval history of the region’s Byzantine ruins, Peter left his home to semi-complete his high school education in Sparta.

“He wasn’t good in school,” says Joanne, Peter’s devoted wife of 45 years, to which Peter laughs, nodding profusely. He never finished his last year of schooling. Maybe he just preferred the company of college students instead.

Peter is effortlessly charismatic — a trait that served him well when it came to finagling his name onto a release list after being conscripted (for a second time) to the Greek air force during the Turkish invasion of Cyprus in 1974. Two years prior, he already spent over 28 months training and working in a position he doesn’t miss. His second draft responsibilities mostly consisted of putting bombs on the airplanes.

Without rescinding his Greek pride, Peter sought the American dream and got it. Selling and delivering baked goods in Sparta could only keep the restless man satisfied for so long. It did, however, introduce him to his wife, whose Uncle Dimitri was a loyal customer. Joanne, who had three other suitors (one of whom also happened to be named Peter), met him in the summer of 1975. They were married two months later.

Germane to his prior military service, Peter’s security apparel is an Air Force blue. A silver tie clip holds his black necktie in place. A black pen peeps out of his left chest pocket. I guess decades of running laundry and dry cleaning businesses means never leaving his house with an un-pressed collared shirt. Before managing Bigelow Cleaners, Peter found his foothold working two jobs making pizza and running a dry cleaner store in Mattapan (the owner apparently ran off to Greece to find a Greek husband). By this point, the then 25-year-old was a husband, father, homeowner, and businessman.

Over the years, Bigelow’s did more than just bring him good business. It also brought him good customers — one of whom happened to be the former president of Boston College, Reverend J. Donald Monan, along with then vice president and dean of faculties, Father William B. Neenan. It was this unexpected introduction that began Peter’s employment as the most beloved security guard on campus. His duties varied over the years, from being the president’s personal bodyguard in the football stadium box to working at one of the on-campus libraries. But his latest post seems to be the most rewarding of all — mostly for those around him.

“With his constant good cheer, enthusiasm for life, and human connection to both colleagues and Student Ambassadors, his presence enhances our everyday experience here so much,” says Diana Larsen, Assistant Director of Exhibition Design, Collections Management, and Curatorial Affairs at the McMullen.

Peter’s Greekness radiates from his olive-toned skin and through his thick, endearing accent. He’s like a reincarnated Aristotle — without a beard, but with an open disposition to engage in philosophical discussion. He’s your willing and able interlocutor. He might ask you what you had for breakfast, if there’s any love interest in your life, whether you actually like the art hanging in the galleries. Even if you don’t understand what he says, you can’t interrupt him, because his mind is already moving on to talk about something else with the same fervor and briskness that lost you in the first place.

“Conversing is my favorite part about working at the museum,” says Peter. “If you work with young people, you never feel old.”

Age feels irrelevant to those who know him. Students flock to the man over forty years their senior for guidance or a good laugh. It’s probably because he has a way of effortlessly simplifying life crises with a funny joke. He’s a confidant, someone in whom you can trust to share your woes and wishes, even if you’ve just met him. It’s the kindling of an unlikely friendship, transcending an unfelt generational divide.

On the rare occasion that Peter is not engaging with people, he might quietly immerse himself with the museum’s art. Hands behind his back, he stares at a painting, likely one that he’s walked by a thousand times, as if it’s a living, breathing person to whom he wants to ask probing questions.

Peter is not just a custodian of the museum, but also of the people in it. He offers more than just free therapy sessions. He will drive you anywhere you want to go (except for Tuesdays when he drives his grandchildren to Greek school) — an outlet, perhaps, to release his exuberant amount of energy. If there is someone he thinks you should talk to, he will undoubtedly make an introduction, conflating your differences by raising up mutual similarities.

One of the many other ways Peter shows his affection is by sharing food.

“He regularly shares parts of his lunch with us at the Museum, and has been known to dip out for a Starbucks run every once in a while,” says Josh Artman, a student ambassador working at the McMullen.

Peter’s pastry-delivering days are clearly not over, satiating hungry bellies with a mid-afternoon pick-me-up: an assortment of desserts, which he cuts into bite-sized pieces to reveal delicate, flakey layers of phyllo dough, dripping with honey and tumbling pistachio crumbs. He watches in excitement for wide-eyes and satisfied nods. If you’re wondering where to find the best baklava in Boston, there is only one answer in Peter’s mind: Joanne’s kitchen! Don’t ask him if he wants to have any. His response will be the same every time: tapping his stomach with both his hands while shaking his head.

Peter is a veritable encyclopedia of all things Greek — including the etymology of Greek words. Echo Zhuge, another Student Ambassador, recalls him teaching her yasou for “hello” and kukla for “sweetheart.” If you don’t pronounce it correctly, or understand it properly, he won’t let you leave the conversation until you do. This might pose as a challenge when he teaches the untranslatable.

“Philotimo — there is no word to replace that in Greek,” says Peter proudly. “It’s not just ‘friends,’ but friends with honor.” It’s no coincidence that Aristotle, the Father of Western Philosophy, first coined the Greek word philia for “friendship.” And if there is any friend with honor, to honor, it is Peter Madis.

At the end of his shift, Peter announces his departure with his signature “OKAY” as the glass double doors of the museum — now fast asleep — close behind him. He ambles outside and down the steps of the entryway, pausing as if to take in a breath of the evening air. He will probably stop to pick up more baklava for the morning shift of working students before heading home.