Keep in mind that last summer was one of the better summers for me to be Asian. I grew up across the world from my extended family and away from other Asian-American kids who had close ties to their own cultural backgrounds. Couple that with the fact that it wasn’t cool to be Asian when I was a kid—the first and last time I spoke Chinese in front of my friends, I got made fun of. I spent much of my childhood and adolescent period either not knowing where I came from, or running from it. What that means is the majority of my cultural identity came from how hard I could throw a baseball, or something dumb like that. I’d been out of that town for two years before last summer, in a place with a larger and closer-knit Asian community. I felt Asian for the first time. Knowing this, maybe you can see why I chose to go to the Museum of Chinese in America after deciding I was irretrievably late to a work barbecue on the southern tip of Manhattan (the details of which are to be kept private, pursuant to the confidentiality agreement that I signed). I walked to Chinatown.

The Museum of Chinese in America greets its visitors with a sign above its door that says “MOCA,” one of the better museum-name-acronyms I’ve seen in my time. On a sunny day with the light pouring into the windows, you can’t really tell if the museum is open or not. That’s because most of the lighting inside is meant to highlight the various artifacts and photos and pieces of historical context, and general visibility seems to be more of an incidental byproduct of this. I bought a ticket and looked around, waiting for my eyes to adjust to the darkness.

The first exhibit detailed immigration history, divided into three major periods where Chinese immigrants were admitted to the US, the last of which my parents were a part of back in the 80s. These immigration waves were the product of a long and kind of tumultuous cultural and legal battle against leanings that created ugly things like this (a pistol that kicks the “Chinaman” out when activated): 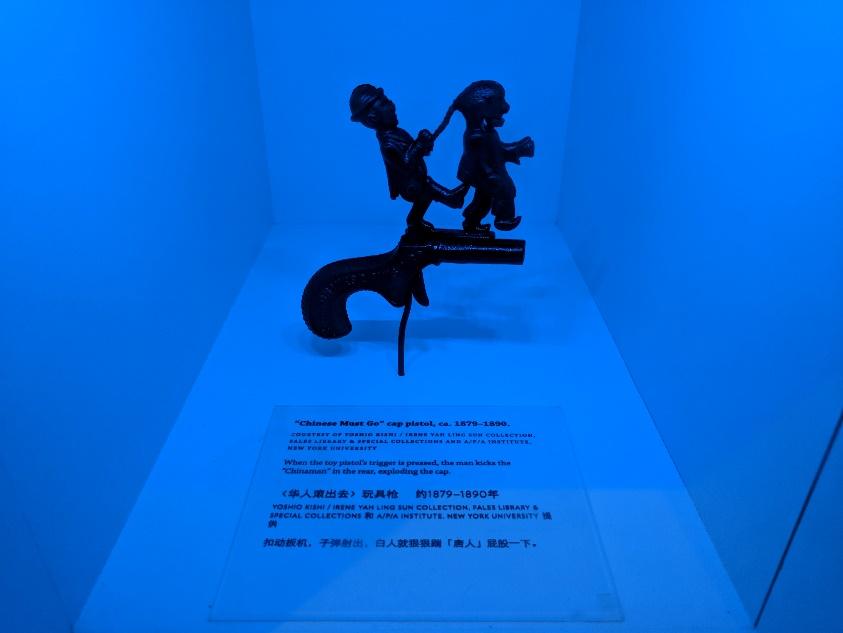 But thinking more positively (though debatably, and by a narrow margin), there was a poem written on the wall of the immigration exhibit. “Last sight of the village, / Looking back / I feel my heart cut in two,” it began. I thought of my parents, who elected to leave China to come to the US together after they finished school. They left everything they had back in their home country—family, friends, connections, culture, native language—and didn’t have the money to return to China for more than ten years. All this, in order to create a better life in a country that didn’t even want them here for over a century. Never mind the comfort zone.

Every now and then I’ll see a family from China walking through Boston Common, with a toddler stumbling around. While the toddler is trying to work through its early stages of fine motor development, I can see it in the parents’ eyes that they’re working through their own issue, slowly piecing together where they even fit into this weird new world that surrounds them. It’s things like this that remind me how much I owe to my parents. They didn’t leave everything behind for me to slack off and let my life slip through my fingers. The poem ended with “Disappearing into the clouds: / What is our fate?” It’s a hard question, but I feel like I’m sharing something unspoken with these other families I see, crafting their own answers.

In the room next door, there was a guy around five years older than me staring intently at a photo in the exhibit. Maybe it’s in my pattern-recognizing nature as a human, but I’d estimate that he was also skipping some other barbecue somewhere else in that humid city, enriching himself on his day off. I didn’t care for his curiosity at first, but if something intrigues someone for long enough that you notice, you kind of have to wonder what’s going on. When he moved on to another section of the exhibit, I snuck up to the photo, as if my interest in it wasn’t correlated with his. The label read “Chinese immigrants on board ship crossing the Pacific, ca. late 1800s.” 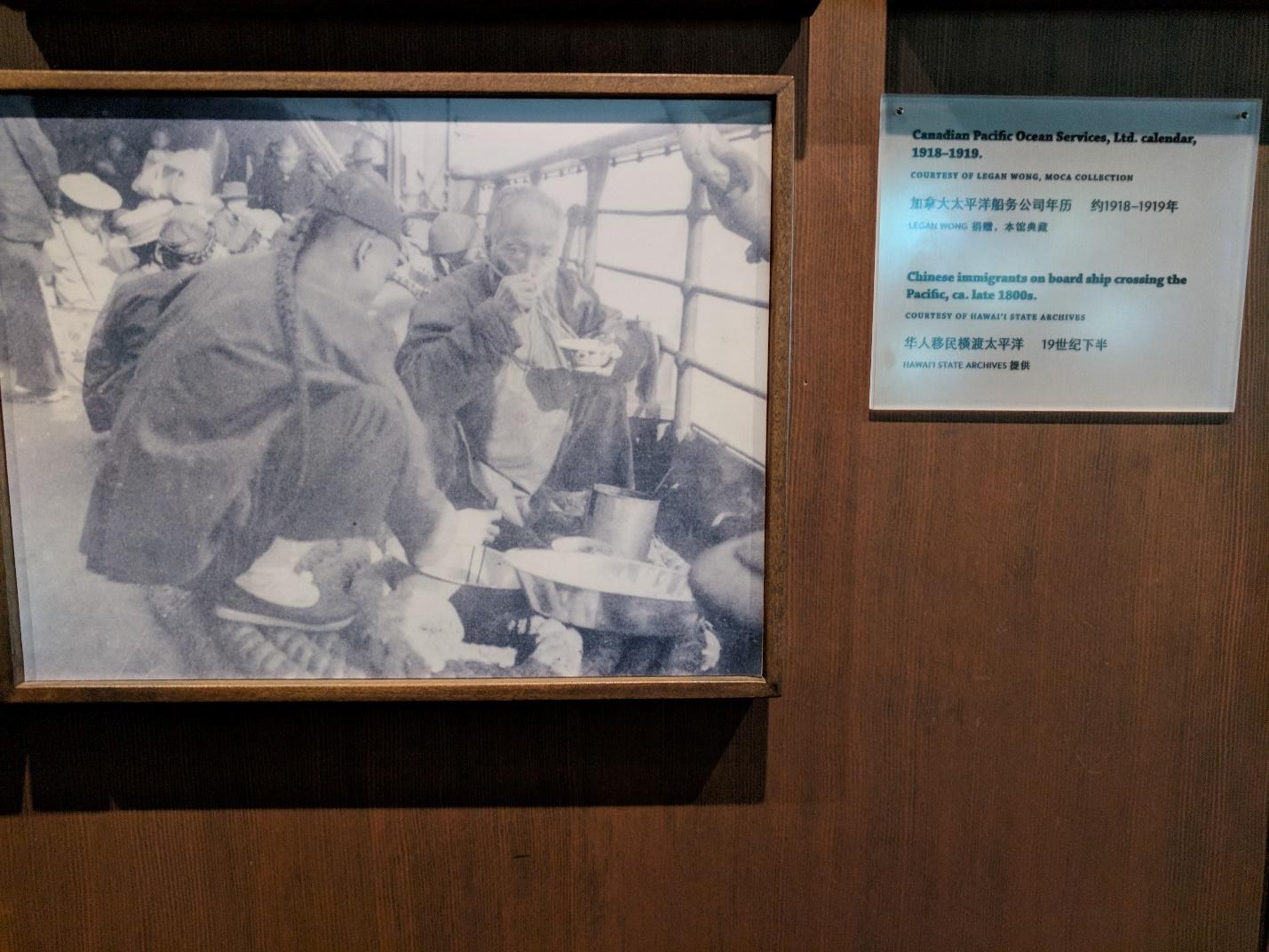 The picture was grainy. Black and white. There were two men in the foreground, one squatting with his heels completely on the floor, the other eating rice from a ceramic bowl and looking over at his friend. The bowl, I noticed, had a pattern printed on the side, which I’m 99% sure was blue in real life, drawing from my partial knowledge of Chinese ceramics.

I have to say I never figured out why the guy stared for so long. Maybe it was because he saw another guy a few minutes before him, looking at the photo for an uncomfortable amount of time as well. That history is lost, though. But I stared at the photo for a long while too, the reason for which I’ll try to put into words: if you took a look at the old man eating rice from the presumably blue bowl and told me “this is your grandfather, this is you,” I might even believe it. 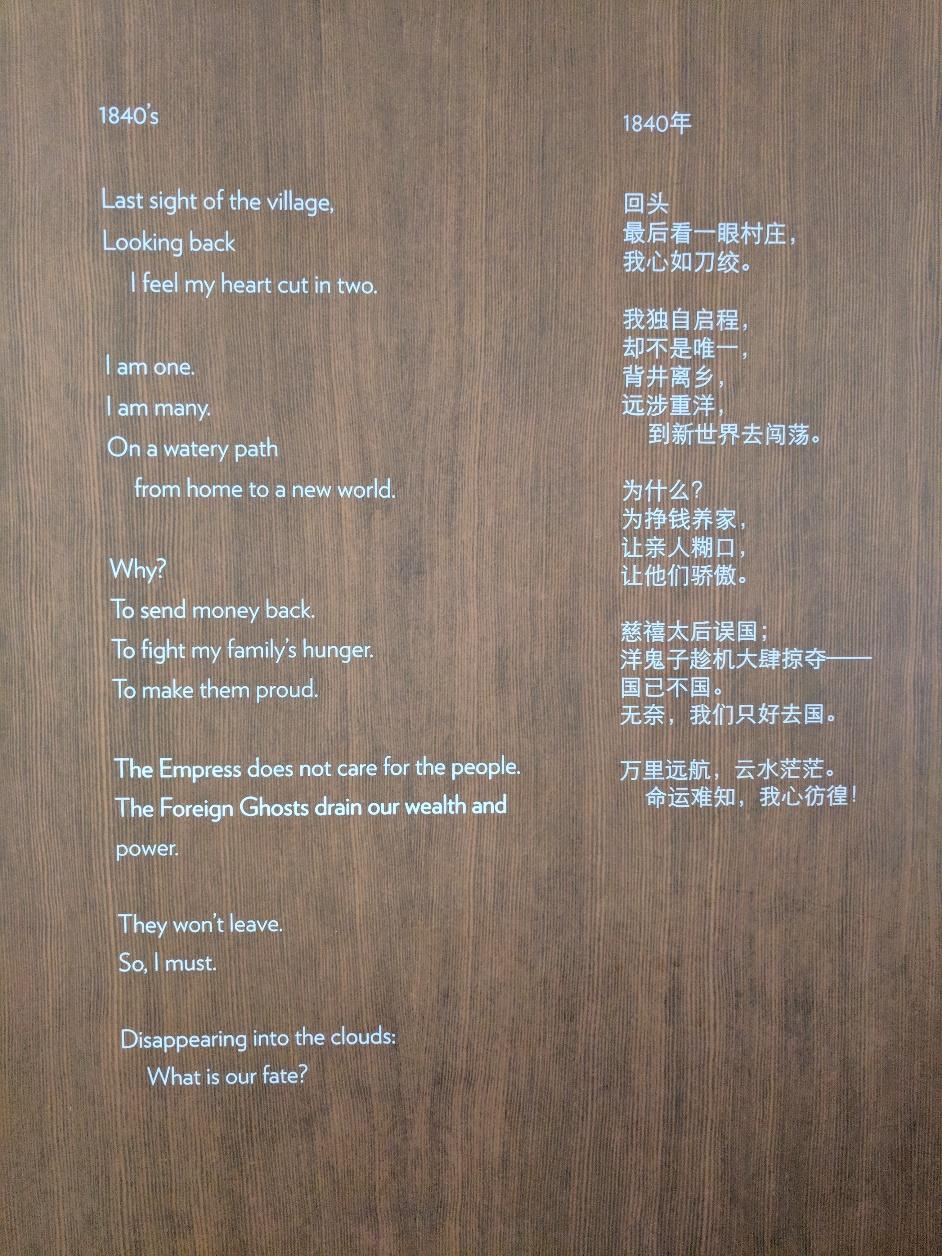