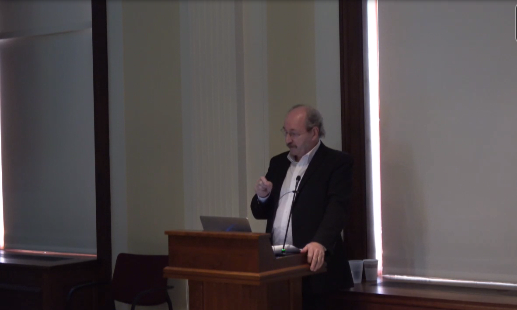 The McMullen Museum of Art welcomed the Founding Director of the Irish Museum of Modern Art (IMMA), Declan McGonagle as part of its Museum Current lecture series. In this illustrated talk, McGonagle explored issues raised by the opening and subsequent development of a Museum of Modern Art in Ireland at the end of the 20th century–to argue that an expansion of the inherited model of ‘museum’ and of the definitions of art, artist, and public value are now necessary.

Declan Mc Gonagle has been Director of the National College of Art and Design, Dublin, since 2008. He is a Contributing Editor of Artforum, New York, and a member of the International Advisory Panel of Engage, London, and writes, lectures and publishes regularly on art, museum/gallery policy issues, and curates exhibitions with a focus on the relationship between art, artist, and society.

The lecture, “It’s about Them, Not Us! ‘Turning the Museum in an Anxious World'” took place at the McMullen Museum on March 30th, 2017. A recording can be accessed via the following link: Declan McGonagle Lecture. This video requires the latest version of Flash. If you experience any problems viewing the video, please update your flash player at https://get.adobe.com/flashplayer/.